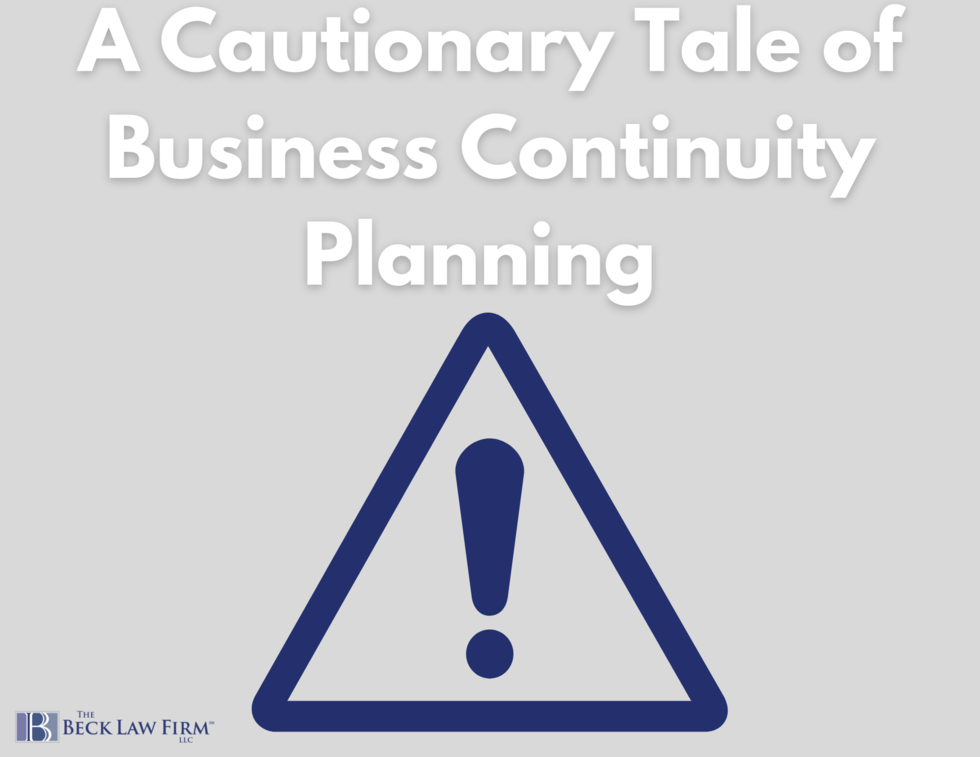 In our experience, one of the most overlooked estate planning needs is business continuity planning. Many business owners don't realize that they need to plan for what will happen to their business should they die, become incapacitated, retire, or simply be out of the office for an extended period. Others, however, make a plan but fail to fully consider the implications. For instance, many business owners decide their company will be split equally between their children, just like their other assets. Fair is fair, right?

Not always. Consider this recent cautionary tale from Mississippi…

However, later in his life Cascio Sr. decided to split interest in the family businesses equally between each of his children. Cascio Jr. felt it unfair that his siblings would benefit equally from the companies to which he had dedicated his career, while they had pursued their own endeavors. He believed he deserved full ownership of Cascio Storage and Warehouse, Inc, and Cascio Investments, LLC, and as tensions grew relationships between the siblings soured.

Eventually, lawsuits were filed. Cascio Jr.'s two sisters claimed he was improperly utilizing funds from the businesses for his personal gain, claiming his multimillion-dollar home and ranch as evidence. The siblings reached a settlement, in which Cascio Jr. surrendered his rights to Cascio Investments, leaving the sisters as the sole owners, and splitting ownership of Cascio's Storage and Warehouse three ways.

As part of the settlement, Cascio Jr. agreed to sign a non-compete agreement (NCA). Initially, the NCA covered Cascio's Storage and Warehouse. However, weeks later when the agreement was finalized and the document itself was drafted and presented to Cascio Jr. to sign, changes had been made expanding the NCA to include Cascio Investments, LLC. Cascio signed the NCA, which included a statement that he had read and agreed to the NCA with the advice of counsel.

Two years later, in 2018, Cascio Investments brought a lawsuit against Cascio Jr., alleging that he had violated the NCA by contacting five of its clients, including Cascio Storage and Warehouse. Cascio Jr. filed a countersuit, claiming that the NCA was unenforceable because it had been changed without his knowledge. Eventually, the courts ruled in favor of Cascio Investments, finding Cascio Jr.'s claims that he had not read the final agreement unbelievable and stating he had willfully and maliciously violated the NCA more than 80 times. In total, Cascio Investments was awarded $944,920.71 in judgements by the court.

Unfortunately, situations like that of the Cascio family occur far too often. Many parents, like Mr. Cascio, want to be ‘fair' and split their assets equally among their children. However, when a family business is among your assets, equal may not be fair. For instance, what if, as in the case of the Cascio family, only one of your children joins the business while the others pursue unrelated careers? Would it be fair to then give equal shares (and therefore equal control) in the company to your other children? Would that go over well with the one child who has dedicated their life and career to the business? Or, what if the other children don't want to become involved in the business, or worse – what if they want to exercise control but know nothing of the business and its industry?

While there are many angles and scenarios to consider with business continuity planning, there are also many options to ensure that your children, your business, and your employees are protected and provided for. You could give your children who are involved in the business a larger share in the business or give them the option of buying the other children out of their shares over time.  You could also vest control over the business with the child(ren) involved in it, while leaving an economic (profit) interest to non-involved children.  If you have employees that want to continue the business, you could give them an avenue to purchase the business.

You have many options for your business planning, but the most important factor is getting your planning done sooner rather than later. Life is unpredictable—your family and employees could find themselves scrambling to keep things running if something were to happen with no plan in place.

At The Beck Law Firm and Peach State Wills and Trusts, we can help you think through your options and choose the best plan according to your needs. To start your planning, give us a call at (678) 344-5342.

Joel Beck founded The Beck Law Firm, LLC in 2007. His firm focused on business law and estate planning needs of clients, two areas that he was drawn to based upon personal and business experiences in his life, including a ten-year career at NASD (now known as FINRA).

Thank you for contacting us. We will get back to you shortly.

Please complete all required fields below.